Digital PCR (dPCR) quantifies the absolute number of copies of a target genomic or complementary DNA (cDNA) from a sample, and therefore, it can be used for a variety of applications. For genotyping applications, dPCR has enough sensitivity for rare allele or copy number variation detection, liquid biopsy analysis, confirming homology directed repair (HDR) or non-homologous end joining (NHEJ) induced by CRISPR-based genome editing, or DNA quality assessment for next generation sequencing (NGS). In addition, dPCR is a sensitive technique that can assess gene expression from single cells, determine expression levels of microRNAs, identify viral infection, and detect viral load. Although the reagents are very similar to a traditional quantitative PCR (qPCR) assay, the method of quantification is different. The similarities and differences between dPCR and qPCR are outlined in the following breakdown of dPCR steps.

As with any genomic analysis, a sample of nucleic acid must be obtained. For genotyping applications, a sample of the genomic DNA (gDNA) needs to be purified from the tissue or sample of interest. For gene expression analysis, the mRNA target(s) of interest need to be isolated and converted into cDNA with a reverse transcriptase assay. As with qPCR, dPCR amplifies the target DNA using a thermostable DNA polymerase, so it is unable to amplify RNA directly.

After purified gDNA or cDNA is obtained, the sample is mixed with forward and reverse primers and a hydrolysis probe that are designed to have sequence complementary to the target gene/DNA of interest. The primers anneal to the outer regions of the target sequence (typically between 60–150 bps in length) identical to a typical PCR reaction. The 5′ nuclease (hydrolysis) probe anneals between the forward and reverse primers, which lends another layer of specificity to the reaction. Hydrolysis probes include a 5′ fluorophore and 3′ quencher. As in a traditional qPCR assay, the primer and probe design are key to obtaining clear results. Since the design of digital PCR assays and qPCR assays is similar, more information on the design of these components can be obtained by reviewing the Real-time PCR guide: Part 1—assay design. IDT offers a variety of different assays to perform dPCR, including PrimeTime™ qPCR Probes, PrimeTime qPCR Probe Assays, or Affinity Plus™ qPCR Probes with locked nucleic acids.

Digital PCR can also be done using SYBR® Green (Life Technologies) or EvaGreen® (Biotium) intercalating double-stranded DNA dyes rather than 5′ nuclease probes. The design of primers for these assays is critical since amplification of primer-dimers cannot be distinguished from amplification of the target. Using well-established assays and performing melt-curve analysis on the products can ensure the specificity of the assay. For more information see the DECODED™ online articles,  qPCR with intercalating dyes and Melt-curve analysis for improved intercalating dye qPCR.

Although assembly of a digital PCR reaction is identical to qPCR assays, the data generation stage differs. dPCR assays first partition the reaction into individual nanoliter reactions so there is either 1 or 0 target DNA molecules in each partition. Two distinct methods are used to partition the reaction. In some dPCR platforms, the reaction is divided into individual micromolded plastic wells, whereas, other dPCR platforms create nanoliter sized reaction droplets as an oil/water emulsion. Rather than analyzing one single amplification reaction in real time like qPCR, dPCR analyzes around 20,000 individual qPCR reactions.

After partitioning, the plate or water droplets in the water/oil emulsion are amplified using regular PCR cycling parameters. As DNA polymerase extends from the forward primer during the elongation/extension part of the cycle, its exonuclease activity degrades the probe, releasing the 5′ fluorophore from the 3′ quencher, which in turn releases detectable fluorescence. If the assay includes intercalating dyes rather than a hydrolysis probe, then the fluorescence increases as double-stranded PCR amplicons accumulate. 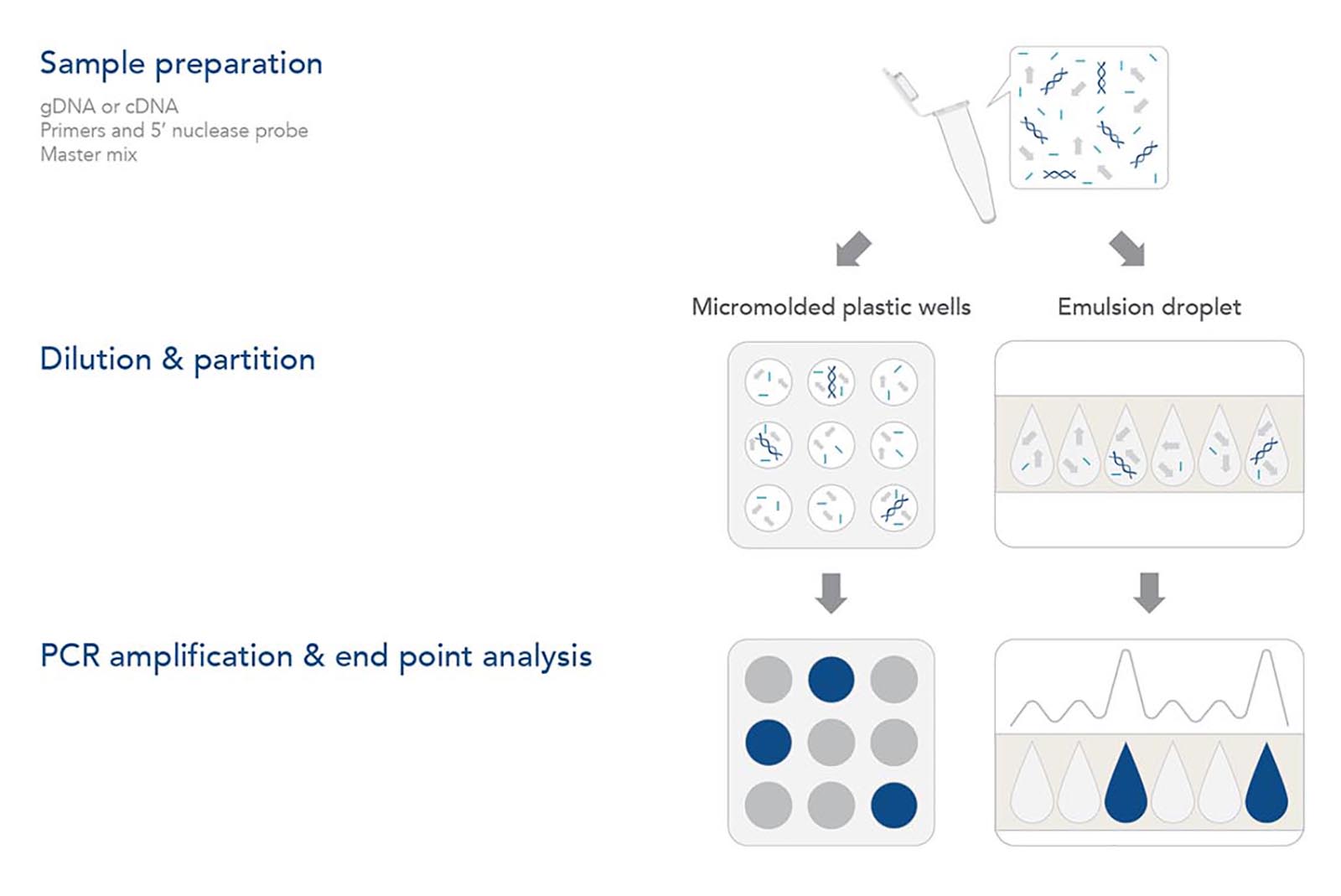 Figure 1. Digital PCR (dPCR) workflow. After isolation of genomic DNA (gDNA) or conversion of an mRNA sample to cDNA, master mix, target specific primers, and 5′ nuclease probe(s) are added. The mix is diluted and partitioned so there is either 1 or 0 targets in each partition. Some dPCR platforms partition into micromolded plastic wells; whereas, other dPCR platforms create emulsions of oil and water droplets. After PCR amplification, the fluorescent signal for each well or droplet is recorded. The number of positive wells or droplets provides an accurate count of the number of starting target gDNA or cDNA molecules in the sample.

The individual partitions are also amenable to multiplexing where multiple target DNAs or cDNAs are analyzed simultaneously. Just like a multiplex qPCR reaction, 2–5 sets of primers and probes with distinct fluorophores are mixed with the sample. Since the template or target DNAs are partitioned into individual reactions, one set of primer and probes will amplify the individual target, and therefore, the primers and probes will not compete for reagents during amplification as in a typical multiplex qPCR assay. During analysis, the number of partitions for each of the fluorophores represents the number of individual targets for that specific primer and probe set. Counting the partitions for each primer and probe set in the multiplex assay can establish an absolute ratio for the different targets. Multiplexing dPCR reactions are sensitive to detect even rare alleles for a gene and determine copy number variations.

Probes and assays for digital PCR

Digital PCR is a sensitive method to determine the genotype of a DNA sample.

Digital PCR provides an absolute measure of the expression of your gene of interest.

Available with an assortment of fluorophore/quencher combinations, including ZEN™ and TAO™ Double-Quenched Probes for reduced background fluorescence improves the sensitivity of dPCR experiments.

Available in unit sizes perfect for dPCR applications. Assays include a primer set and 5′ nuclease probe premixed in either tubes or plates. Larger sizes can be ordered with custom primer/probe ratios.