Hybridization capture is a targeted next generation sequencing method that uses long, biotinylated oligonucleotide baits (probes) to hybridize to the regions of interest. It is particularly helpful when genotyping, detecting rare variants, and exome sequencing. 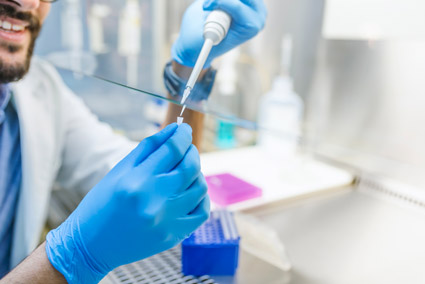 What is hybridization capture?

Hybridization capture, also called target enrichment, is a method of targeted next generation sequencing (other methods of targeted sequencing can include the use of amplicons or molecular inversion probes). Before hybridization capture is performed, DNA samples are converted into sequencing libraries. To create libraries, the DNA is randomly sheared into smaller fragments by mechanical or enzymatic methods, and sequencing adapters are added. Depending on the library design, PCR amplification may be required.

Regions of interest within the library are then captured using long, biotinylated oligonucleotide baits (probes). Biotinylated baits/probes are designed to hybridize to regions of interest (e.g., exome, known genes related to cancer or a metabolic pathway). After hybridization of baits to the fragmented DNA, streptavidin is used to separate the bait:targeted fragment complex from other fragments that are not bound to baits. Baits can be arranged in different ways to sequence regions of interest. For example:

Baits can also be positioned to overcome challenging motifs such as repetitive sequences. Because the DNA has been randomly sheared during library preparation, captured fragments are overlapping and unique.

When to use hybridization capture

The point at which samples are multiplexed during the workflow is a major benefit of hybridization capture. Indexes (molecular barcodes) are ligated to DNA samples immediately after fragmenting, so samples can be combined before or after the libraries are created (i.e., before enrichment). Precapture multiplexing can be advantageous because it increases efficiency of the capture while conserving enrichment reagents (Figure 1). Multiplexing large numbers of samples can simplify the workflow and lower cost but can sacrifice metrics. The number of targets that can be used in a panel can be increased by simply adding more probes, making the target number virtually unlimited. An indexed DNA fragment can hybridize to any unique probe that complements it and be pulled down for sequencing, making it infinitely scalable.

Hybridization capture works well for genotyping and rare-variant detection. Since capture with hybridization probes does not require PCR primer design, it is less likely to miss mutations and performs better with respect to sequence complexity. Hybridization capture’s capacity for mutation discovery makes it particularly suited to cancer research. The sequence complexity and scalability make it a better choice for exome sequencing.

Figure 1. Illustration of the precapture multiplexing method before NGS. Libraries are pooled at equal mass before target enrichment to conserve reagents while increasing workflow efficiency.

For sequencing runs that require additional specificity of sequencing, adapters with unique molecular identifiers (UMIs) can be used with hybridization capture. UMIs are similar to indexes in that they facilitate identification of specific molecules within a sample. They can be used to remove duplicates generated during PCR that may create a bias, which can be particularly helpful for quantification. UMIs can also be used for error correction to remove PCR and sequencing errors, which is particularly important for low-frequency variant detection. By removing errors, you can increase the accuracy of your variant detection without introducing false positives (background noise).

Get started with custom hybridization capture

Working in one of these applications? Just starting? See how you can easily improve your workflows and results.

xGen Lockdown Panels are stocked enrichment panels for targeted next generation sequencing. The panels consist of individually synthesized and quality-controlled xGen Lockdown Probes that have been validated to provide the highest level of performance.

Learn how other scientists have applied hybridization capture technology in the field.

Read our articles about hybridization capture.