CRISPR-Cas12a (Cpf1), an alternative to Cas9 for targeting AT-rich genomes

Did you know that use of CRISPR endonuclease Cas12a (also known as Cpf1) can greatly expand the number of target sites available for genome editing? Unlike the G-rich PAM requirement of Cas9, Cas12a recognizes a T-rich PAM, TTTV. Not only is this enzyme useful for targeting AT-rich genomes, but it has applications in altering disease or phenotype-linked mutations in AT-rich regions through homology-directed repair. In addition, Cas12a does not require a tracrRNA for function. Learn more about Cas12a editing efficiency and TTTV site frequency in this article.

CRISPR genome editing has revolutionized genomics research over the past few years, largely facilitated by the CRISPR associated (Cas) enzyme, Cas9. However, occasionally researchers performing genome editing are confronted with a narrow target region that lacks suitable Cas9 protospacer adjacent motifs (PAMs). S. pyogenes Cas9, which is the most frequently used CRISPR enzyme for genome editing, does not efficiently cleave target sequences without its PAM site, NGG [1,2]. Thus, functional target sites may be limited or even non-existent in sequences with low GC content. This poses a significant technical obstacle for editing in AT-rich regions.

Cas12a, a CRISPR endonuclease that recognizes an AT-rich PAM

Cas12a (also known as Cpf1), a putative class II CRISPR endonuclease recently identified and characterized in Prevotella and Francisella [3], potentially overcomes some of the Cas9 enzyme shortcomings, such as its G-rich PAM requirement. Cas12a endonuclease from IDT is derived from Acidaminococcus sp. BV3L6. It recognizes a T-rich PAM, TTTV, and creates a staggered, double-stranded DNA cut with a 5′ overhang. By including Cas12a in one’s genome editing toolbox, researchers greatly expand the number of target sites available for editing. Not only is this enzyme useful for targeting AT-rich genomes, such as that of Plasmodium falcipracum, but it also has applications in altering disease or phenotype-linked mutations in AT-rich regions through homology-directed repair. In addition, Cas12a does not require a tracrRNA for function.

Cas12a can serve as an alternative to Cas9 endonuclease due to its many unique features. However, Cas12a presents its own challenges. Unlike S. pyogenes Cas9, which cleaves most NGG PAM sites to some degree, Cas12a exhibits a lower rate of cleavage for the Cas12a PAM sequence. Here we summarize a few findings made by researchers at IDT that provide guidance for improving Cas12a editing efficiency in your own experiments.

Cas12a editing efficacy is PAM-sequence dependent [3]. IDT scientists conducted a comprehensive study that investigated the correlation between choice of Cas12a PAM sites and final editing efficacy. We tested 1240 crRNAs targeting 22 human genes, and found that TTTV PAM sequences (TTTA, TTTC or TTTG) direct DNA cleavage more robustly in comparison to those with TTTT PAM sequences (Figures 1 and 2). It is important to include this principle in your experimental design since, for example, the TTTT motif is significantly more prevalent in the human genome in comparison to its 3 other TTTN counterparts (Figure 3). 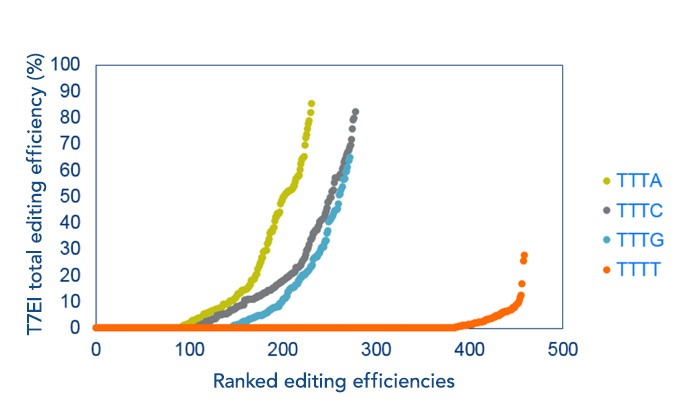 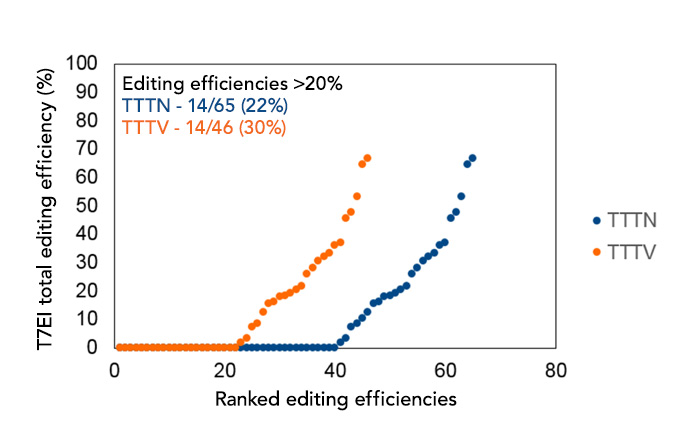 Figure 3. The frequency of TTTN motifs across chromosomes in the human genome. The 4 TTTN motifs and their reverse complements are counted and plotted for each individual human chromosome. The TTTT motif, which is not an effective PAM sequence for A.s. Cas12a (Cpf1), occurs much more frequently than the other 3 motifs (TTTA, TTTC, and TTTG), which are the recommended PAM sequences for A.s. Cas12a.

The effectiveness of this reagent has been tested in multiple cell lines derived from major model organisms, including HEK-293, Jurkat, HeLa, and Hep1-6; although, the level of improvement in editing efficiency may vary by cell type. Figure 4 shows targeting of 2 sites in the human and mouse HPRT genes. Their total editing efficiency was compared between groups with or without the addition of the Alt-R Cpf1 (Cas12a) Electroporation Enhancer. The data clearly indicate that Alt-R Cpf1 (Cas12a) Electroporation Enhancer is necessary for efficient Cas12a-mediated editing in RNP electroporation experiments. 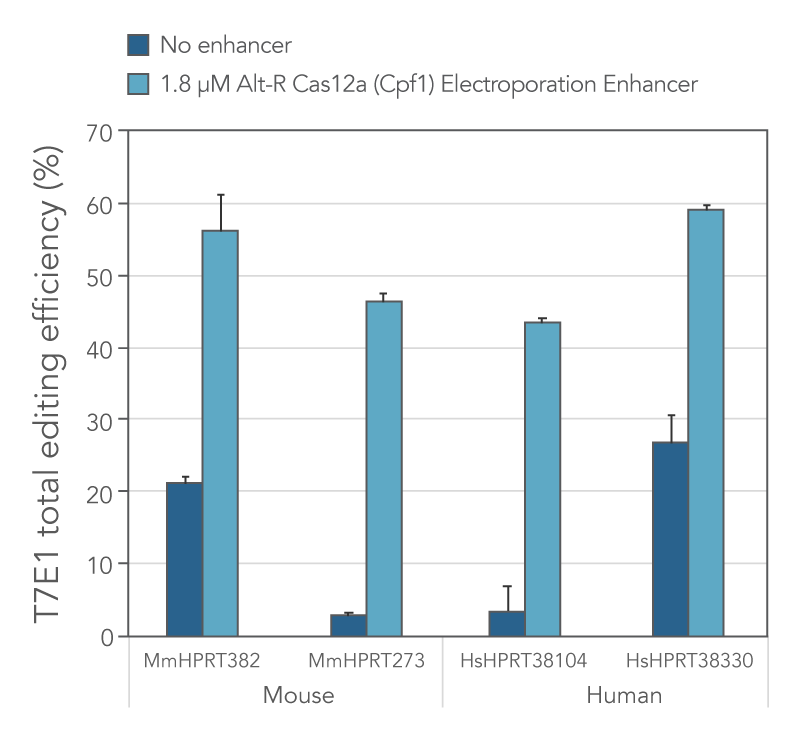 However, T7 endonuclease is less robust in recognizing single-base mismatches [5]. Previously, we have shown that the T7EI assay underestimates the efficiency of genome editing mediated by CRISPR-Cas9, when compared to next-generation sequencing (NGS) approach, which captures all editing events regardless of type [6]. Interestingly, in Cas12a edited samples, the editing efficiencies estimated by T7EI are much closer to the corresponding NGS results, suggesting that T7EI is more accurate in quantifying on-target genome editing events for CRISPR-Cas12a (Cpf1) (Figures 5 and 6). 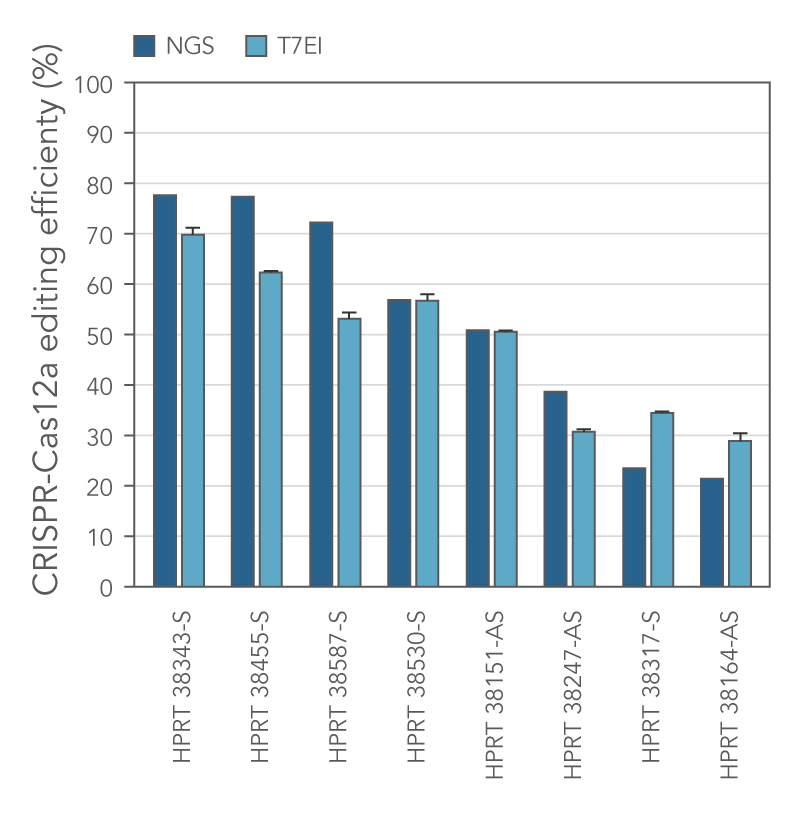 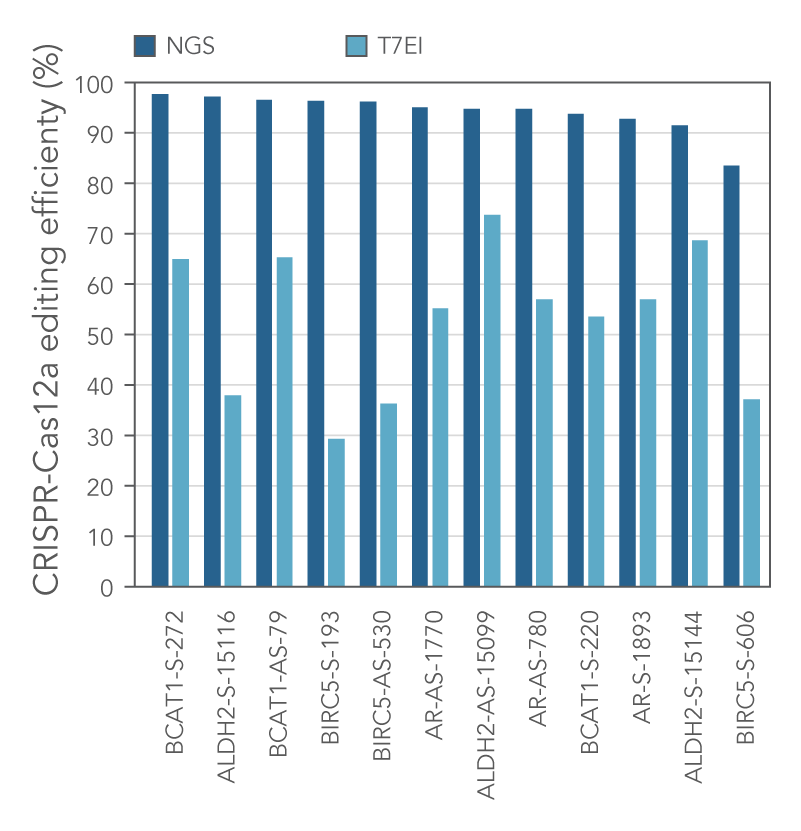 Figure 6. Genome editing efficiency estimated by T7EI assay parallel NGS results in 3 Cas12a (Cpf1) edited PAM sites across each of 4 human genes. Alt-R CRISPR-Cas9 crRNA (30 nM) were introduced by lipofection into HEK-293 cells that stably express S. pyogenes Cas9 nuclease. 3 PAM sites were targeted in each of the 4 genes, BCAT, ALDH2, BIRC5, and AR. Similar to the experiment described in Figure 4A, genomic DNA was isolated 48 hr after lipofection, and was tested using both the Alt-R Genome Editing Detection Kit and amplicon sequencing.

What we have learned about CRISPR-Cas12a genome editing