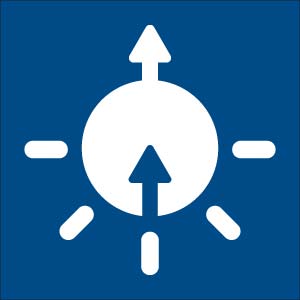 The group’s major line of research has been to characterize bacterial small, noncoding RNAs (sRNAs), similar to miRNAs in eukaroytes. Their 2000−2001 genomic study identified numerous sRNAs for which no function was known. To determine the structure and function of some of these sRNAs, Dr Gottesman’s group uses bioinformatics to identify potential mRNA target regions based on sequence complementarity with specific sRNAs. They confirm the interactions by attaching a reporter gene (lacZ) to the target mRNA and mutagenizing one or many of the nucleotides that are predicted to base pair. The unmutated sRNA no longer binds to the mutated mRNA, resulting in mRNA and reporter gene expression. However, when compensatory mutations are introduced in the sRNA that restore base pairing, the mRNA is degraded and activity of the lacZ reporter is lost (Figure 1). The researchers can also follow whether a specific mutation in the sRNA disrupts its binding to the mRNA by looking directly at mRNA presence or absence on northern blots. Base pairing often causes the mRNA to be degraded while a mutant (unpaired) form is stable. Restoring direct interactions by compensatory mutations restores degradation of the mRNA. Read more about this work in Masse et al. [1] and Guillier and Gottesman [2].

Figure 1. Site-directed mutagenesis confirms sRNA binding site on mRNA. A 21 nt stretch within a bacterial sRNA binds just upstream of a mRNA ribosomal binding site (RBS), preventing ribosomal binding and resulting in degradation of the mRNA (Panel A). sRNA binding is prevented by site-directed mutagenesis of 3 bases in either the sRNA or the mRNA (Panels B & C). Complementary mutations in both strands restores sRNA:mRNA binding (Panel D).

In a second line of research, the laboratory studies a transcription initiation factor (RpoS) activated by stress and starvation—for example, lack of phosphate or change in pH. The goal is to better understand the environmental signals that regulate bacterial adaptation to its surroundings. RpoS is constitutively expressed, but under normal growth conditions is bound by a response regulator protein (RssB), which presents it to the ClpXP protease for degradation. However, when the cell is starved, stressed, or enters stationary phase, an anti-adaptor protein specific to the type of stress [e.g., IraM (magnesium), IraP (phosphate), IraD (DNA damage)] blocks RssB binding of RpoS. Under these conditions, RpoS is not delivered to ClpXP, and not degraded. As part of this project, the researchers want to identify the sites of interaction between the various protein components of this pathway.

To understand how anti-adaptors work with RssB, the gene encoding one of the Ira proteins is randomly mutagenized using an error prone polymerase to look for amino acid sequence changes that lose the Ira-RssB binding. The researchers use an RpoS-lacZ reporter construct which is stable (resulting in blue colonies) so that mutations that prevent Ira-RssB binding result in degradation of RpoS and lack reporter expression (resulting in white colonies). Sequencing of these mutants allows the group to localize a domain of interaction between the two proteins. Site-directed mutagenesis is then used to identify the subset of specific mutations directly responsible for the disruptive phenotype. Subsequently, one of these specific Ira mutants is used with a randomly mutagenized RssB and screened for mutations that restore expression of the reporter (blue colonies). Site-directed mutagenesis is then used to further narrow the interacting amino acids in the Ira and RssB proteins. These compensatory mutations or allele-specific mutations define and confirm the site of interaction between these proteins. As more is known about the proteins—e.g., once their crystal structure is solved—bioinformatics can be used to determine which residues are exposed on the surface. Site-directed mutagenesis can then be performed one residue at a time, followed by a change to the parallel residue on the other protein, instead of going through the extensive screens described above.

Nadim Majdalani received his PhD in microbiology at Texas A&M University. He joined the Gottesman laboratory as a postdoctoral fellow, and began to characterize a plasmid DNA with a funny phenotype— when the DNA was over-expressed, it caused the cells to become very mucoid, or “gooey”. Upon mutation, this phenotype was lost. Nadim was able to determine that the responsible sequence was about 100 nt. Since there was no detectable protein or ORF, it had to encode a functional RNA. It was through this line of research the laboratory discovered the small, regulatory RNAs on which much of their research now focuses.

Gene fragments from 200 to 3000 bp shipped plated, or in suspension and ready for use.

Create diversity in clone libraries and in site-directed mutagenesis experiments.