With both 2-part and single guide RNA, similarly high editing levels are achieved. For a smaller number of target sites, one or the other type of guide RNA may give better editing efficiency.

The CRISPR-Cas9 system has accelerated biomedical research by allowing straightforward and efficient editing of the genome at specific locations. Editing is achieved by generation of double-stranded breaks that either can lead to insertions or deletions and subsequent knockout of genes via the non-homologous end-joining (NHEJ) pathway or can lead to activation of the homology-directed repair (HDR) process when a template is present. HDR can be used to correct mutations or to introduce novel genetic sequences. For instance, HDR could be used to produce fusion proteins.

During CRISPR-Cas9 editing, double-stranded breaks in genomic DNA are generated by the Cas9 protein. The specificity of DNA cleavage depends on a guide RNA molecule that is necessary for the Cas9 nuclease to be active. This guide RNA consists of a constant region (which binds Cas9) and a variable region, called the spacer, which directs the Cas9 nuclease to a homologous target protospacer location in the genome. In native bacterial immune systems, the Cas9 guide RNA is not just one molecule; it is a duplex made of a tracrRNA and a crRNA (Figure 1A). These two RNA molecules hybridize together by a 16-nt complementary sequence. The constant region is present on the tracrRNA, while the spacer is present on the crRNA molecule.

For use in labs and eventually clinics, the tracrRNA and crRNA can be chemically synthesized as RNA oligonucleotides. For Alt-R CRISPR-Cas9 tracrRNAs and crRNAs, synthesis allows for length optimization and introduction of chemical modifications that protect against degradation by endo- and exo-nucleases. Thus, the Alt-R guide RNA complex is stabilized, leading to higher genome editing efficiency. Alternatively, the tracrRNA and crRNA can be synthesized as a single molecule, called a single guide RNA (sgRNA). This molecule includes a loop of a few nucleotides that fuse the crRNA and tracrRNA 16-nt complementary sequences, forming a hairpin-like structure (Figure 1B). As with 2-part guide RNAs, chemical modifications can be introduced during synthesis to stabilize Alt-R CRISPR-Cas9 sgRNA. 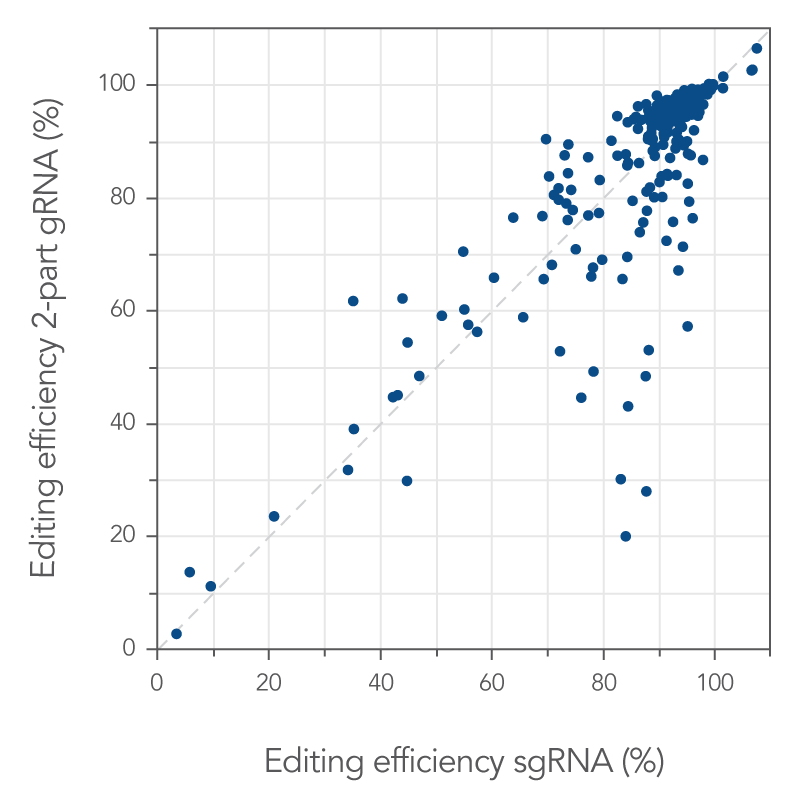 Figure 2. Comparison of editing efficiencies obtained with 2-part guide vs. single guide RNA sequences results in near-linear data showing that for most target sites, both approaches work equally well. RNP complexes were made using either 2-part or single guide RNA and delivered into Jurkat cells (human T-lymphocyte-derived cancer cells) via an Amaxa® Nucleofection™ system (Lonza) at a concentration of 4 μM, in the presence of Alt-R Cas9 Electroporation Enhancer. Genome editing efficiencies (percent of genomes edited within the cell population) were determined by target amplification followed by next-generation sequencing (rhAmpSeq amplicon sequencing) on an Illumina® instrument. Editing efficiencies were plotted, showing good agreement (R2 = 0.66).

The difference in editing efficiency between 2-part guide RNA and sgRNA was calculated for each target site and plotted in a ranked fashion to visualize the distribution of the differences (Figure 3). For this data set, the 99% confidence interval was calculated (–4.48% ≤ µ2-part – µsgRNA ≤ 3.35%, where µ is the population mean) and is shown as a grey area. The target sites outside of this interval are color coded. In orange, on the far left of the graph, are the target sites (43 sites, 16.9%) where the sgRNA outperformed the 2-part guide RNA. In green, on the far right of the graph, are the target sites (68 sites, 26.7%) where the 2-part guide RNA outperformed the sgRNA. Most sites (144 sites, 56.4%) fell within the 99% confidence interval, where both guide RNA formats worked equally well.

Considerations when choosing between 2-part and single guide RNAs

Oligonucleotide synthesis efficiency is negatively correlated to the length of the oligonucleotide. In other words, the longer the oligo, the lower the full-length yield. Consequently, shorter oligos (crRNAs and tracrRNAs) are less expensive than longer oligos (sgRNAs). Conversely, as the 2-part system has twice as many ends compared to sgRNAs (4 vs. 2), the 2-part system is more sensitive to exonuclease activity. This sensitivity, however, can be addressed by placement of more chemical modifications. It is also worth noting that cell cultures can differ in endogenous nuclease activity. Therefore, we recommend using sgRNA or highly modified 2-part guide RNAs (i.e., the Alt-R CRISPR-Cas9 crRNA XT) in environments with high nuclease activity.

The mode of Cas9 delivery also helps determine which guide RNA composition to use. Delivery of Cas9 protein complexed with a guide RNA, known as a ribonucleoprotein complex (RNP), leads to immediate activity in the cell. Therefore, a 2-part guide RNA complex can be chosen to form the RNP. When Cas9 protein delivery is indirect via mRNA or plasmid delivery, we recommend using sgRNAs, as they are more stable over time in the intracellular environment. See Table 1 for a summary of these suggestions.

In conclusion, independent of the guide RNA format, high editing levels can be achieved. The data presented here show that for a very small subset of target sites, dramatic differences in editing efficiency can occur. If you find poor editing efficiency in your experiment, we recommend trying a few different target sites. Alternatively, you can try a different guide RNA format.